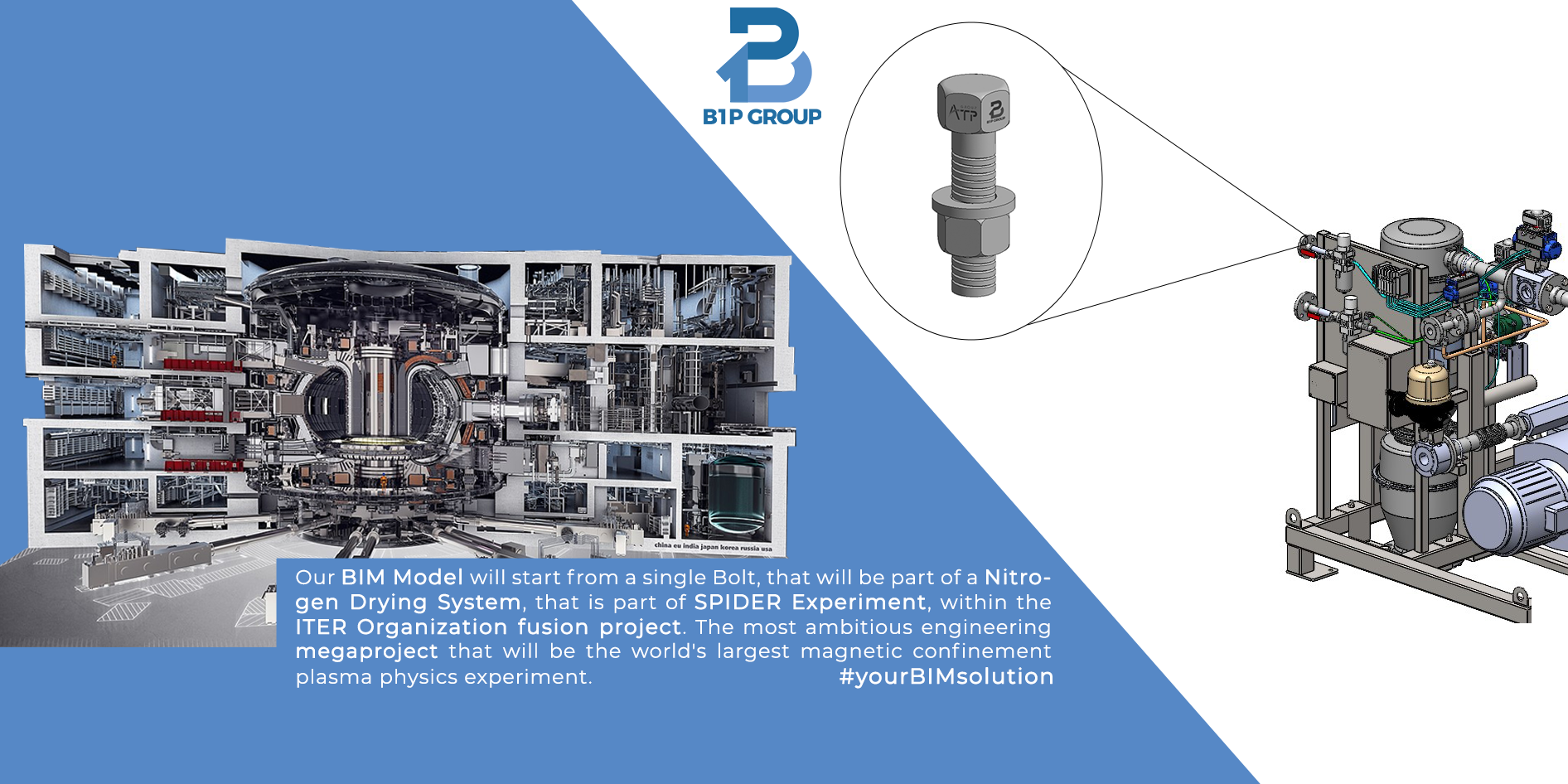 Europe is at the driving seat of the quest for fusion energy, offering the promise for abundant, safe and sustainable energy for the future.
This important European investment fosters industrial innovation by generating new knowledge and spin-offs, opens new markets and increases the competitiveness of companies, promoting economic growth.

B1P Group is proud to announce that will work for the BIM Modelling activity for an Nitrogen Drying System for the SPIDER Beam Source.
The equipment will be installed at the Consorzio RFX Infrastructure, as testing unit for the SPIDER EXPERIMENT within the ITER Organization fusion project, the most advanced fusion reactor in history.

Fusion, the nuclear reaction that powers the Sun and the stars, is a potential source of safe, non-carbon emitting and virtually limitless energy. Harnessing fusion’s power is the goal of ITER, which has been designed as the key experimental step between today’s fusion research machines and tomorrow’s fusion power plants.

It has been a year since the inauguration of SPIDER, the world’s most powerful negative ion source at the service of the fusion community to master key technologies in the field of powerful heating systems. The knowledge acquired will be used in ITER. This is why it is hosted in the ITER Neutral Beam Test Facility (Padua, Italy), an international centre of scientific excellence. F4E, Consorzio RFX, ITER India, ITER Organization, together with approximately 120 companies, have contributed to this experiment by means of components, infrastructure and know-how. The value of components paid by F4E is in the range of 34 million EUR, while for India the investment has been roughly 3 million EUR. Consorzio RFX financed the construction paying approximately 25 million EUR. In the adjacent hall, another experiment – MITICA – is also in progress counting on contributions from F4E, Consorzio RFX, ITER Japan, ITER Organization.

What is Iter? ITER, which in Latin means ‘the way,’ will be the world’s biggest experiment on the path to fusion energy. It will be the first fusion device to generate more heat than used to start the fusion reaction, relying on an impressive range of technologies which are essential to deliver fusion power in future.

The ITER Device Millions of components will be integrated in the biggest fusion device. The assembly of the device will be one of the most complex engineering operations. Europe is responsible for almost half of the components of the machine, while the remaining six Parties will have to deliver equally the rest. In Europe, their fabrication is the result of the collaboration between F4E, industry and research laboratories

We will keep you in touch! www.yourbimsolution.com